Opinions: The lack of a Home button in iPhone X can get used to, but it takes time

Apple lifted the embargo on the publication of reviews and opinions on iPhone X, so the internet was literally flooded with articles and videos about the new product. We have collected for you the most interesting excerpts from such materials, so that you can get as complete a picture of the device as possible. Basically all authors agree that iPhone X's design is great and Face ID works as it should. However, this novelty is quite specific and may not suit everyone. The thing is, getting used to using an iPhone without the Home button can be tricky. It takes a while to get used to the different ways of interacting with a smartphone in the familiar range.

The author of this publication, Nilay Patel, reported that Face ID works 'mostly well', but with some lighting changes, the system may not recognize the user.

I left my New York office for a walk in the bright light of the sun and Face ID was definitely having trouble recognizing my face. This only changed when I approached a shady area or brought the smartphone closer to my face than usual. When I walked into a store that had a lot of bright lights (including fluorescent lighting), Face ID also had trouble recognizing it.

He also noted that apps that hadn't yet updated the design for iPhone X looked 'ugly' with black bars at the top and bottom of the screen.

Applications that have not yet been adapted for iPhone X run in the so-called 'soft pad' mode. This means that large black stripes appear at the top and bottom, which, in fact, imitate the frames around the display iPhone 8. And there are a lot of un-updated applications. Including Google Maps and Calendar, Slack, Spotify and more. Games like CSR Racing or Sonic The Hedgehog look especially weak with these games. They work fine, of course, but they look ugly. It is especially disappointing that the bottom of the screen glows white in this mode.

Journalist David Pearce test drive iPhone X while jumping on a trampoline. He immediately warned that he was not very good at this, so the test was not at all sparing. He also called the device 'without a doubt the most interesting smartphone this year'.

The rep, Matthew Panzarino, took iPhone X to Disneyland California to test it out on a daily basis. He noted that Face ID 'works really well' and is 'incredibly easy to set up'. He also posted several photos taken at iPhone X that day. In good lighting conditions, in his opinion, there is no difference between shooting on iPhone 8 Plus and iPhone X. This is not surprising, given that they have cameras and processors, in fact , the same.

One of the issues that users of Google Pixel 2 and Pixel 2 XL have encountered is fast pixel burnout. Panzarino noted that nothing like this has happened with iPhone X, but he also hasn't been using a smartphone long enough to claim that the iPhone is completely devoid of this problem.

I haven't used the phone long enough to say it is pixel-burn-proof, but Apple says a lot of work has been done to prevent this from happening. I use Twitter with the control bar at the bottom very often, but I haven't found any burnt pixels yet. That's all I can say at the moment, but the Pixel 2 cured the problem very quickly.

Note that in new smartphones Google, the lower part of the display is subject to pixel burnout – which is why the journalist talks about the Twitter navigation menu.

Joffrey A. Fowler noted that Face ID works 'nine times out of ten', but it is wrong if you put on a fake beard.

During my test, Face ID worked correctly 9 times out of 10. The smartphone must be held directly in front of your face, as if you want to take a selfie. However, you shouldn't bring it too close – it won't work. The system recognized me in the dark and wearing sunglasses – but not when, for the sake of experiment, I put on a fake beard. (Apple says Face ID will adapt well to a real beard as it grows slowly and Face ID has machine learning.)

Scott Stein said it takes a while to get used to the new gestures and shortcuts in iPhone X, to quickly return to the desktop or open apps menu, and to activate Siri or Apple Pay.

The good old Home button has been replaced by a variety of gestures. For the first few hours, I instinctively reached for the place where the key should be, and felt like I was left without a finger.

However, there is now a new large button on the side that is responsible for Apple Pay and Siri. I instinctively pressed and held it to turn off the smartphone, and only after that I realized that it now had a different function. (To turn off the smartphone, now you need to hold down both this button and the volume down button, which does not feel like an intuitive gesture at all).

By the end of the first day, I was forced to admit that I miss the simple and intuitive Home button.

Incidentally, iPhone X Stein had no problem identifying a user with a fake beard. For the sake of experiment, he even changed his haircut, changed the shape of his beard several times, until he finally shaved it off altogether, and Face ID worked with a bang. 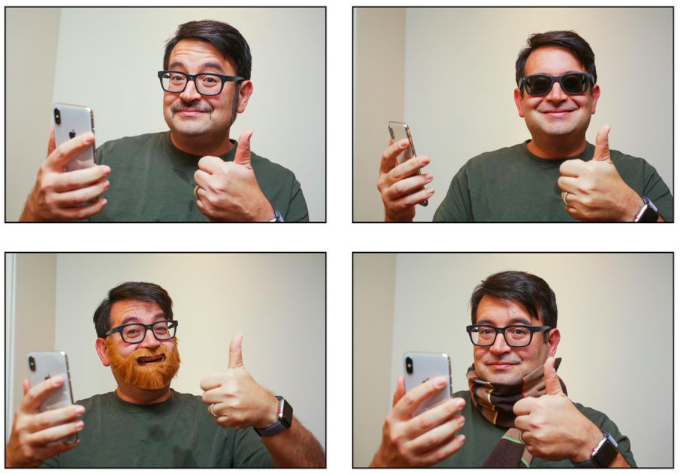 But a wig, a combination of a hat, glasses and a scarf wrapped around a chin, steampunk goggles and a fake mustache turned out to be beyond the power of Face ID. Stein also noted that the sensors refuse to perceive even a bright and high-quality photograph as a face, so the possibility of unlocking the smartphone using the owner's photo is excluded. Note that the above are, in fact, only first impressions of the smartphone: the authors did not have the opportunity to spend much time with iPhone X, so more detailed and detailed reviews will be published later.